We all know what a squash is, but what is Shakshuka. Easy Shakshuka recipe with squash? What is it?

Years ago, I worked with a Middle Eastern lady and that was the first time I had a taste of Kabocha Squash Shakshuka.

Although it is popular for breakfast, they also served it for lunch or dinner paired with pita bread.

At that time, I was clueless with the name of the dish and referred to it as saucy squash.

So anyway, when I left my job, I lost touch with her.

Sometimes, she made it with beans instead of squash and it was really delicious. One thing that stood out was it’s smoky flavor.

I was watching a show that featured this dish. Finally, I have a name for it and it looked so much like the dish my co-worker makes.

I googled the name and found an easy shakshuka recipe.

Shakshuka is a dish of poached eggs in tomato based sauce, chili, bell peppers, onions and spiced with cumin and paprika.

There are many variants of shakshuka and Kabocha Squash Shakshuka is one of my favorite.

It originated in North Africa but was also popular in the Middle East. The egg is poached meaning the egg white is well cooked with runny yolk.

If you are Vegetarian, you will surely enjoy it. It is healthy and flavorful dish.

How to make shakshuka with squash

Whenever I have squash, it's usually big that I can also make this dish.

The recipe calls for saffron and I have made it with or without saffron and it still turned out delicious.

I have tweaked the recipe to what was available in my pantry. I used olive oil instead of coconut oil. Also, the recipe called for regular paprika instead I also used smoked paprika.

The mixture was quite thick so I added a cup of water. You can use chicken or vegetable broth.

You can crack the eggs and add it directly in the skillet or after cracking each egg, transfer it to a bowl and slid it into the mixture.

I made a few tweaks to the recipe but other than that her recipe was spot on.

What to pair it with

Shakshuka is usually paired with pita bread, naan or challah or have it by itself.

Store leftover in an airtight container and refrigerate up to 4 days. I don't recommend freezing due to squash.

You will be amazed how easy it is to make this dish. Watch my video. 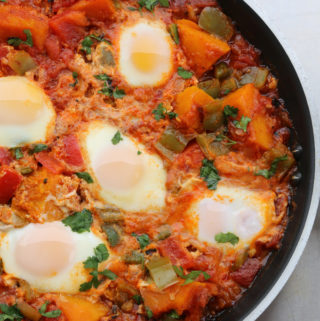 1. I prefer the smoky paprika instead of the regular paprika. It gives the authentic smoky Middle Eastern flavor. 2. If you want a very thick tomato based sauce, eliminate the water from this recipe.