This easy Spinach Stuffed Chicken Breast is seared and baked with stuffing made of spinach, cheese, mayo, bacon and spices. Bacon, mozzarrela and feta cheese adds so much flavor and texture to this stuffed chicken breast.

This stuffed chicken recipe is simple and ready in less than 45 minutes. It is one of my go-to recipe when I want something real quick yet savory and delicious for busy weeknight or when entertaining family and friends.

If you like broccoli, try this Air Fryer Stuffed Chicken Breast with Broccoli and Cheese that you can cook in the oven too.

How to Make this Bacon Cheese Spinach Stuffed Chicken Breast

How to make a pocket in chicken breast

Use a sharp knife to make the pocket. I am using a big knife and a pairing knife. I use the pairing knife to cut the chicken deeper especially at the thickest part. Make sure not to cut all the way through, if it happens seal it with toothpick.

To make a pocket, lay the flat side of chicken breast. Make the slit at the rounder edge. Place your left hand on top of chicken while your right hand is making the slit using the big knife.

You can make a pocket by leaving an inch on both sides uncut but you’ll end up with less stuffing.

So instead, I make a slit halfway with the big knife then I use the pairing knife to cut deeper.

Why sear stuffed chicken before putting in the oven

Pan searing is a brief process of browning chicken to get a tasty crust on the outside. A heavy bottomed skillet like a cast iron works best when searing. It maintains heat well and can be transferred from stove top to oven.

Sear both sides for about 3 to 4 minutes depending on the size of chicken breast till golden brown, then move to the oven.

Tip: For frozen chicken, thaw overnight in the fridge. Once thawed, let it rest briefly in room temperature before searing. You will achieve a better sear and it will cook more evenly.

This baked cheesy spinach stuffed chicken breast recipe is succulent but you can always tweak the recipe to your liking. Consider some of the substitutions I have mentioned below.

If you’re tired of eating chicken but would like to use a different kind of meat with similar flavor, try my Bacon Wrapped Stuffed Pork Tenderloin.

Fresh Spinach – You can use frozen spinach but make sure to thaw it and remove as much liquid. It will make your stuffing runny.

Cream Cheese – I have made this recipe using Boursin cheese (garlic and herb) and it worked perfectly for this cheese stuffed chicken breast recipe. I don’t add any seasoning in the stuffing when I use this. It is creamy just like cream cheese with similar flavor and texture.

Mayonnaise – Not everyone cares for mayo, if you are one of those, you can use Greek yogurt or sour cream.

Mozzarella and Feta – Aside from these 2 cheese, I have used parmesan, fontina, gruyere, provolone and sharp cheddar. Use your favorite cheese as long as it melts easily.

Smoked Paprika – you can use sweet paprika but smoked paprika adds another layer of flavor.

Store leftover chicken in an airtight container up to 3 days in the fridge.

Reheating chicken without moisture can easily dry out. Adding chicken stock or water will keep it moist and tender. If you have chicken bouillion, it is much tastier if you add a pinch to the water.

Side dish to pair with this recipe 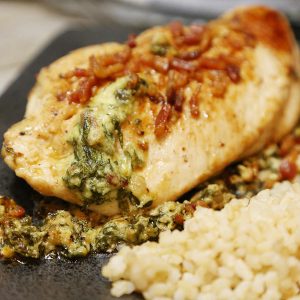