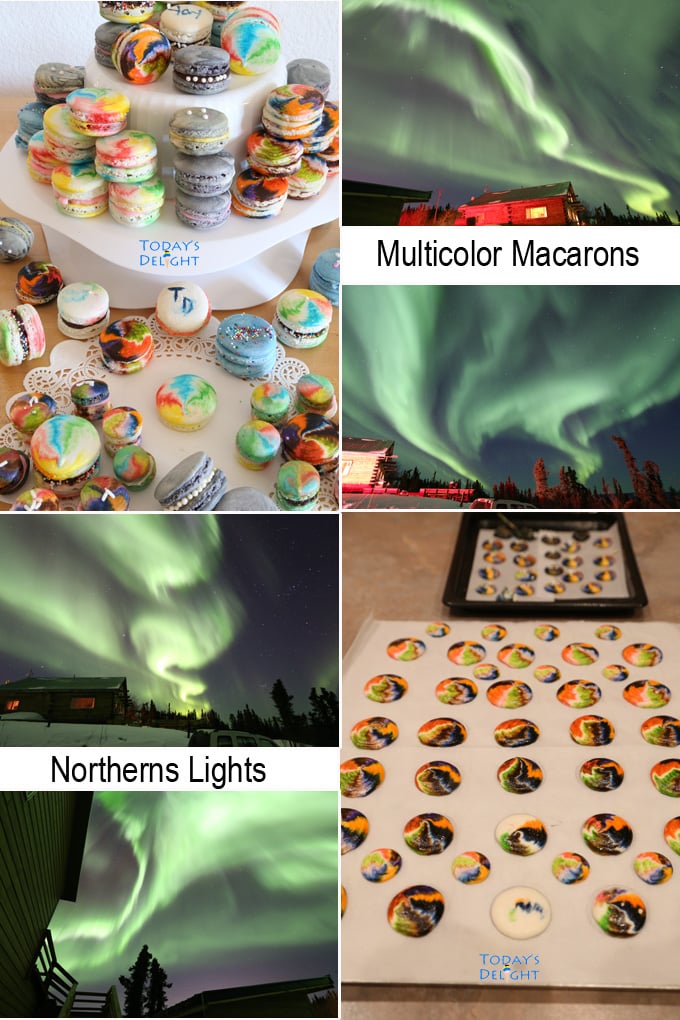 After making the pastel colored French Macarons all I wanted to do was take pictures of it. It was joyful and refreshing to look at. If I can have it as a décor in my kitchen I would. Well, I gave it away but of course I saved 15 pieces for myself. Not good for my waistline.

Note: This is not a step by step instructions on How to Make French Macarons. This will show you how to pipe multicolor macarons.

Click the link above for the French macarons recipe.

I've seen beautiful and colorful macarons that reminds me of the Northern Lights that got me inspired to make these multicolor macarons.

I had the pleasure to see in person, one of nature’s most breathtaking shows, Lady Aurora dancing beautifully right in front of us. On March 2014, on the time of the Equinox I booked a 7 day Northern Lights (Aurora Borealis) viewing in a lodge in Fairbanks, Alaska. Fairbanks is one of the best places to see the Northern Lights. It was booked 14 months in advance and I was so lucky to get it. Most people booked 2 years out. Plus, I was able to booked it around the Equinox which in itself would be hard to get but I got it. Ain’t that lucky! For unknown reason, the Northern Lights is very active during the time of the Equinox. 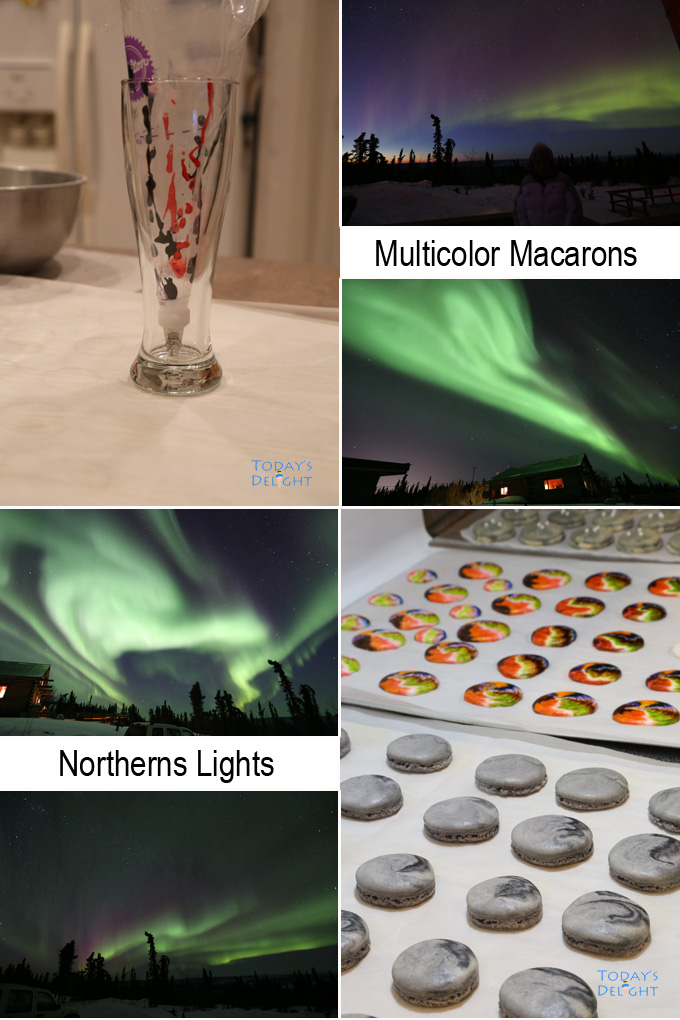 March is a peak season in Fairbanks since it is not as cold as the other months, it is the time of the Equinox and many events happening at that time. After 5 days at the lodge, we transferred to the Springhill Suites at downtown Fairbanks and the Iditarod was happening outside our hotel. Again, ain't that so lucky to witness this event happening in front of our hotel. We also visited the popular Ice Museum and North Pole, Alaska. The week we were there was packed with all these events and on top of that 2014 was the peak of the Aurora maximum. I would love to go back again. Someday I will!

Thank God, we saw the Northern Lights everyday for 5 days. I was pissed before I left for Alaska since we missed the Alaska Airlines 45 minute baggage cut-off time. We were in line and when it was our turn my Mom cannot find her ticket and passport so I let 2 people ahead of us. That was a big mistake. The service counter representative knew we were there before the cut off. I am not saying it was not our fault but it would have been nice if Alaska Airlines worked with us. So we missed our flight.

I had to call their 800 number so our flights can be rebooked. We were booked the following day and charged another $600. Oh, I was so pissed. I called the lodge and the car service picking us up that we were not arriving that night. I still have to pay for the hotel. Not so lucky! If there are other airlines going to Alaska in the future - that would be my last time taking Alaska Airlines.

After this adventure, I became so obsessed with the Northern Lights. So far, I have seen it 3 times on a plane; leaving Alaska, a trip to Iceland and Hong Kong. When I was checking places to see it, my number 1 choice was Norway, then Iceland and Alaska was last. I am so glad I picked Alaska. It was so convenient since it was happening right in front of our lodge. Someday, I plan to go back again and take more wonderful pictures.

I am fascinated by the Northern Lights that I can talk about it forever. Back to my creation, the Northern Lights Multicolor Macarons. I have a video on how to achieve or pipe these multicolor macarons. If you are looking for a step by step instructions on How to Make French Macarons (Part 1) click the link. When making macarons with one color, it is easier to add the color while beating the egg whites. Watch my video to see a couple of ways to pipe multicolors.

Before making these batches, I went to Whole Foods to check their selection of macarons. They have macarons that were spray painted. That will be my next project in a few months. Anyway, I bought the coffee and raspberry filling at $2 a piece. It was good but sweet. Check out my Not Too Sweet French Macarons Recipe.

For the holiday season, try this Candy Cane Macarons with Buttercream Filling. 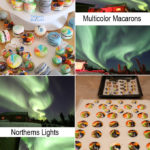 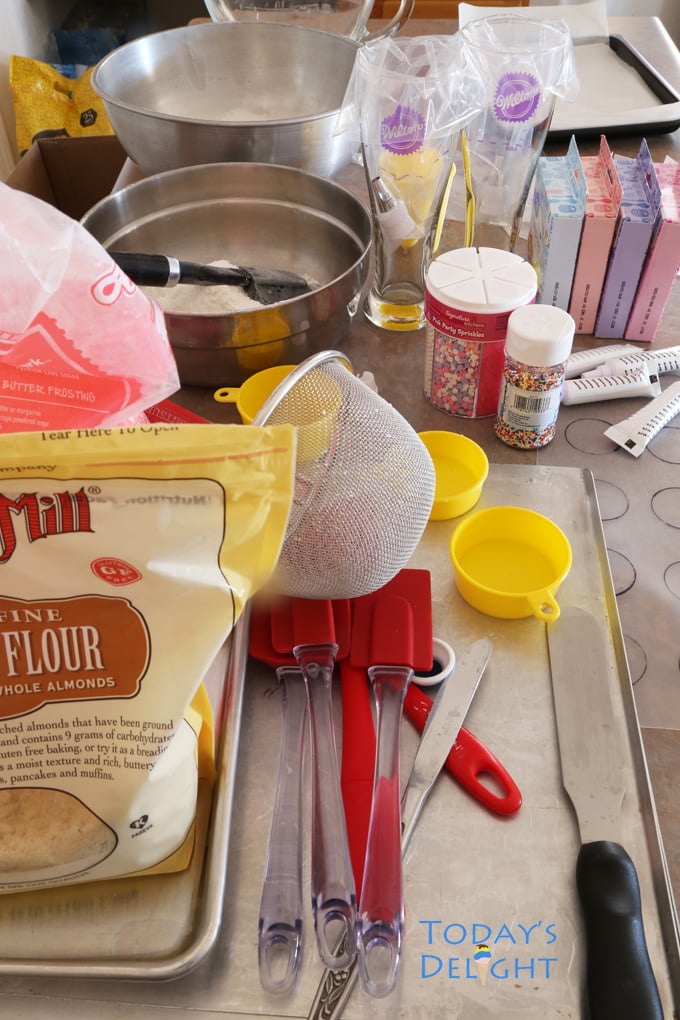