Learn How to Make Latik or Toasted Coconut Curds. Latik is use as topping for delicious Filipino snacks like biko, palitaw, sapin-sapin and more.

Latik adds a crunchy coconut flavor to desserts. I use less topping not to over power the dessert. Serve extra latik on the side.

Latik are curds that form when coconut cream or milk is cooked, reduced and toasted until golden brown.

Also, these are the solids or granules that form during coconut oil production.

Latik is widely used in the Philippines as garnishment to our favorite Filipino desserts or snacks also known as kakanin.

The meat of a matured coconut is used to make latik. The inside of a coconut is water and the white meat or flesh.

The shell of a matured coconut is hard and the underside of a huge butcher knife is use to crack the shell in the middle.

You can have a container ready to catch the coconut water if you like to save it.

The coconut meat is grated and squeezed with both hands.

The liquid extracted from squeezing the coconut meat is called coconut cream or “kakang gata” in Filipino. This is what we use to make Latik.

Coconut cream is richer and thicker than coconut milk. It comes from the first and second squeeze. On the 2nd squeeze a little bit of water is added to the grated coconut meat.

The coconut milk comes after the 2nd squeeze. More water is added to the grated coconut meat. The consistency is not as thick as the 1st and 2nd squeeze.

In the US, matured coconuts are becoming widely available in Asian and local grocers.

If you want to learn how to grate fresh coconut click the link.

The other option is to use coconut cream or coconut milk in can, which I prefer.

Pour both coconut cream and coconut milk in a skillet or pan over medium-high heat.

(2) Bring to a boil then lower heat to medium. Continue to simmer until reduced. Stir occasionally.

(3) Coconut cream is reduced and thicker.

(4) It will start releasing some coconut oil and turns golden.

(5) At this point, you need to stir more so it doesn’t burn and cooks evenly. Reduce heat to medium-low.

(6) Continue to toast the latik or curds until light brown. Turn off heat.

(7) Tilt the pan slightly and push the latik or curds towards the top so coconut oil can flow downwards. Transfer to a container. You can save the coconut oil to use for other recipes.

Note: I have noticed when I use just coconut milk it doesn’t produce enough oil. Add 2-3 tablespoons of olive oil to help toast the coconut curds.

To save time, I double my recipe to make extra servings. Store in an air tight container for a few months in the fridge. 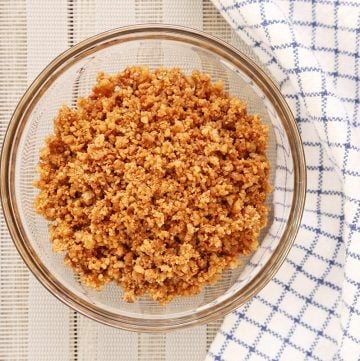