Cinnabon Cinnamon Rolls is a copycat cinnabon recipe with soft, fluffy, tender, buttery dough in a swirl of cinnamon and brown sugar filling topped with creamy, melt in your mouth cream cheese frosting and chopped walnuts. 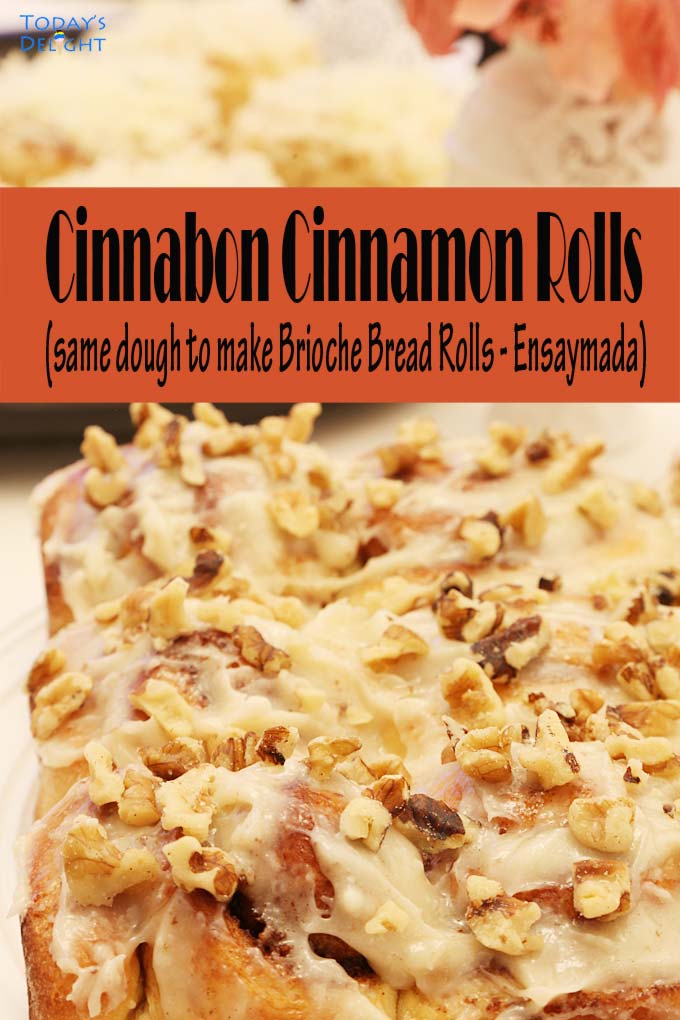 If craving strikes, you know you can make homemade Cinnabon Cinnamon Rolls, just as delicious or even better. The filling and frosting recipe is versatile that you can adjust to suit your taste making it better than store-bought.

Cinnamon rolls are classic bread rolls or pastry rolls served as snack and great with coffee. It is easy to make but proofing the dough takes time.

When going to the mall, as soon as you get closer to the food court the sweet aroma of cinnabon cinnamon rolls are lingering in the air as if it is calling you. It is hard to ignore and you succumbed to have these fluffy sweet rolls at that moment and extra rolls to go.

The great thing about this cinnamon rolls recipe, the same dough can be used to make brioche bread rolls (ensaymada). Isn’t that awesome. It’s 2 types of  sweet bread rolls in one dough.

If you have read my ensaymada post and it sounds similar to this one, YES, it is. The dough ingredients and procedures are the same. 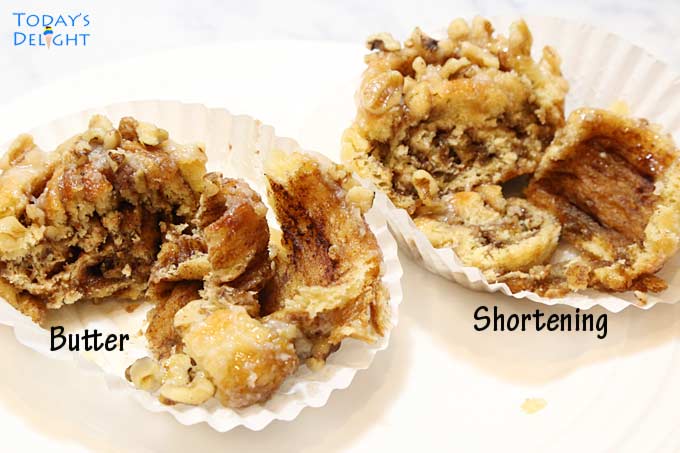 Cinnamon rolls dough can be made either with butter or shortening and you can decide which one you like better.

How to Make Cinnabon Cinnamon Rolls

This step by step instructions for Cinnabon cinnamon rolls recipe is easy but very detailed to help 1st time bakers.

Like myself, when I started baking I felt more confident when I am presented with detailed procedures.

This cinnamon rolls recipe uses basic ingredients and you probably have it already.

As I have mentioned above, this dough recipe can make cinnamon buns and brioche bread rolls.

Whenever I make this, I can make more cinnamon rolls and a few brioche bread rolls or vice versa.

(a) Yeast – please don’t use expired yeast. If you do, make sure it is active.

Sifting the flour is optional but it is a habit of mine. I always sift the flour after measuring.

(f) Cream cheese – Adds so much flavor to frosting.

(g) Salt - It enhances the flavor of other ingredients.

(1) Yeast - Some people can get by using expired yeast if store properly in the freezer. But if you are new to baking, please don’t use expired yeast.

Dry Active Yeast or instant yeast is use as leavening to make dough rise.

The advantage of proofing yeast is you know it is alive before adding to your ingredients.

Although, I’ve been baking for quite a while now, I still prefer to use a packet (2 ¼ teaspoons) of Dry Active Yeast. To activate yeast, it is mixed with lukewarm water and sugar and set aside for 10 minutes.

Water temperature is very important when blooming yeast, it should be between 110 - 115 degrees F.

Heat water in the microwave for 10 seconds then an increment of 5 seconds at a time for about 15 to 20 seconds until it is warm to touch but doesn’t burn your finger.

Notes: TOO HOT will kill the yeast.

If using instant rapid yeast, you can add it directly to ingredients but make sure it is not expired.

The advantage of active-dry yeast, you can tell if it is alive when bloomed while adding rapid instant yeast to your ingredients, there is no way to know if it is alive. If it is bad, then you just wasted all the ingredients.

Where to Rest and Rise the Cinnamon Rolls Dough

Do this before you start making your dough. It has always worked perfectly for me.

(2) This step is optional. If it is cold in your house or has centralized a/c, the best place to rest and rise your dough is in the oven with the door shut.

Set oven to its lowest temperature of 170 degrees F for 4 minutes. At the same time, boil water (half full) in a medium pot. Place uncovered pot of boiling water in the oven to create a warm temperature for your dough to rise.

Otherwise, dough covered with cloth can stay in room temperature in a warmer area in your house. 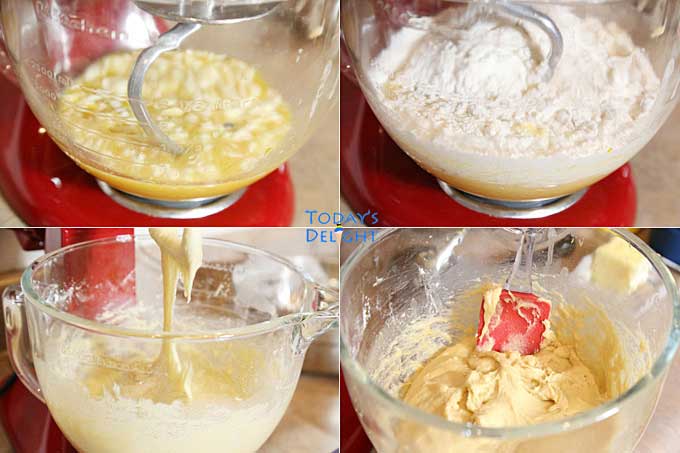 (4) Switch from whisk to dough hook attachment. Add flour in three batches and remaining milk. Set speed to low (KitchenAid #2) while adding flour then adjust to medium (KitchenAid #4 - #6). This step takes about 5 minutes so do not overwork the dough. Also, don’t forget to scrape the sides and bottom of mixer to well blend the ingredients.

Your dough will get very sticky and it will slightly pull away from the side of mixer with some dough sticking at the bottom.

When done mixing, lightly flour your hands and spatula and remove dough from mixer. Use a spatula to detach the dough from mixer and flip bowl upside down until dough falls on a floured surface.

(5) With your floured hands, form dough into a ball and transfer to a lightly greased or floured bowl or  mixer covered with cloth. Place dough in room temperature or in the oven. No need to cover dough if placed in the oven.

(6) Proof dough for 1 ½ - 2 hours or until dough has doubled in size. If yeast is active and you have dough in a warm place, you’ll be surprised how quickly your dough is rising.

Making cinnamon rolls is easy but proofing the dough takes a while.

(7) Once dough has doubled in size, punch down dough to release air or it will deflate on its own once you remove dough with spatula from bowl. Don’t forget to flour your hands, spatula, working area, rolling pin and cutter. 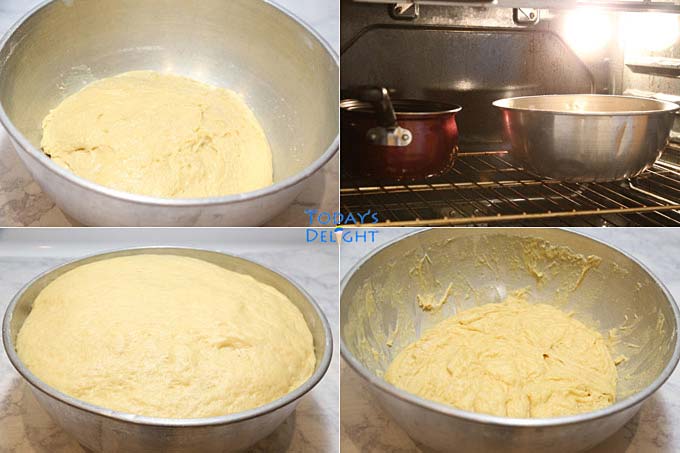 Dough will double in size tremendously if yeast is active and proofed in a warm area.

(8) Kneading is not necessary. Dust dough surface with ½ teaspoon flour for easy handling but avoid adding too much flour to dough.

Cut dough in half. Take one, pull and shape dough into a log. Use a rolling pin, stretch dough from side to side to form a rectangle approximately 17 in x 10 in.

(9) Spread butter on dough surface then combine cinnamon, sugar and flour and evenly spread on dough surface. Roll dough to form a log, evenly cut into 9 pieces and place in a lightly greased mold. Note: If using non-stick mold, no need to grease but grease with butter if using paper liner.

Repeat the same process for the other dough. 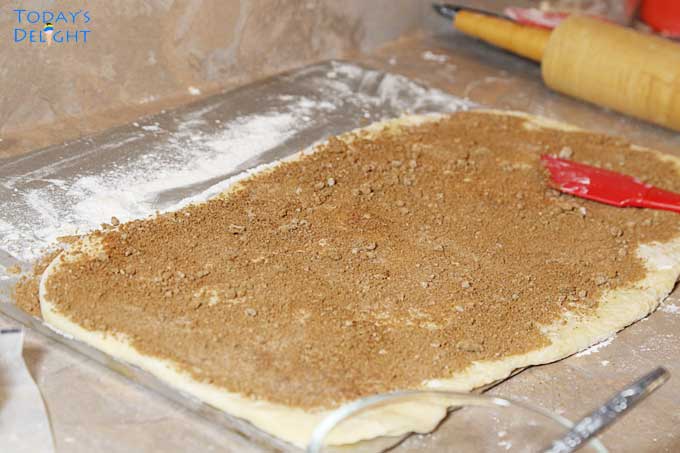 Notes: This dough makes 18 medium cinnabon cinnamon rolls. If you like big rolls similar to store-bought don’t divide the dough in half. 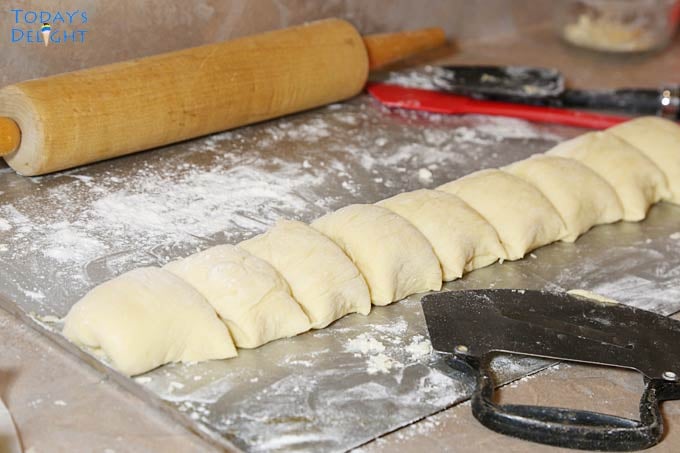 (10) Before cutting dough, boil water in pot and place in the oven. Once all the rolls are done, place mold in oven or in room temperature for 1 hour to rise. Remove mold from oven. 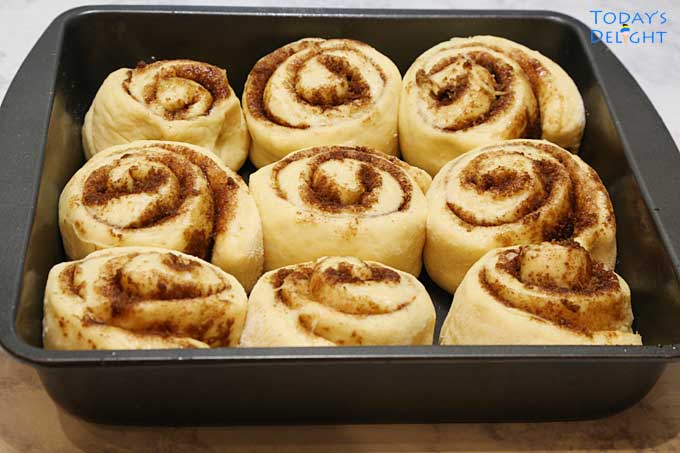 Note: Cinnamon rolls and Brioche Bread Rolls (ensaymada) can be baked together for the same baked time.

(12) Remove rolls in mold as soon as possible and transfer to a serving plate and cool for a couple of minutes then top with cream cheese frosting. Add walnuts or raisins if you like. 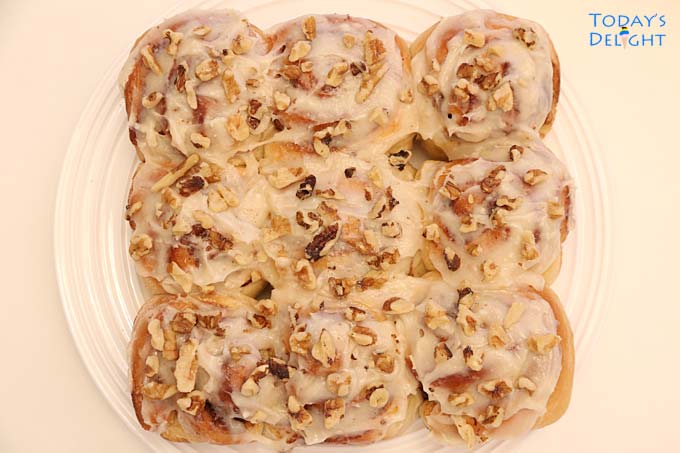 After baking, if house temperature is cool, it can stay up to 2 – 3 days in a sealed container at room temperature otherwise refrigerate for a week. Soften and warm in the microwave.

Store in freezer for up to 2 months. 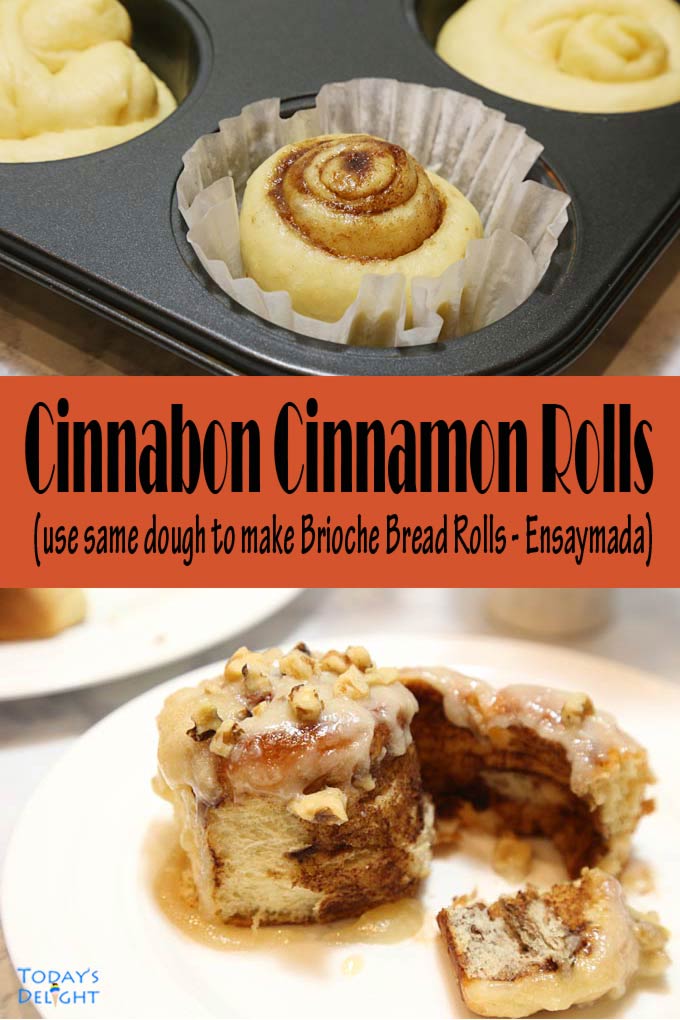 If you have bread flour that you need to use, you can substitute 1 cup all-purpose flour for 1 cup bread flour and add 1 more egg yolk to the recipe. 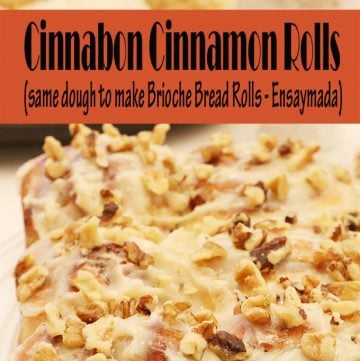 This Cinnabon Cinnamon Filling and Cream Cheese Frosting was adapted from Todd Wilbur. The original recipe where I got it from no longer exist.