This wholesome Chinese Chicken Asparagus Soup is easy to make even on a busy week night.

This healthy soup has a clear tasty broth especially if boiled with chicken bones.

It is a family favorite often served when we were growing up.

Onion – Chopped onion will add so much flavor to soup.

Bone-in Chicken  – Use bone-in chicken legs and thighs for a tasty broth.

Chicken Giblets – (optional) The giblets include chicken heart, gizzard, neck and other organs that are usually packaged in a bag inserted in the body cavity of a whole chicken. It adds so much flavor to the broth and texture.

Canned Asparagus – This soup is tastier if canned asparagus is used. Liquid in can is also added to soup.

Fresh Asparagus tips – (optional) You can add some for garnish but not necessary.

Dried Fungus Mushroom – (optional) But I suggest to add it. If prepared properly, it adds a chewy texture to soup.

Napa Cabbage – This leafy vegetable pairs well with this soup.

Carrots – Another healthy vegetable that adds texture and color.

Egg – Beaten egg is added before turning off heat that adds richness to soup.

Salt and pepper to taste

How to Prepare Dried Fungus Mushroom?

Dried Fungus are grayish black mushrooms that grow on trees in mountainous areas. It is close to wood ear fungus but not the same. In the Philippines, it is referred to as tenga nang daga (ear of a rat) as it resembles a rat’s ear.

You’ll find a bag of dried fungus in Asian stores.

Before using dried fungus, it should be soaked in hot water for an hour or until softened. It will expand about 3 – 4 times in size. Wash in cold water then cut into strips (julienne).

During my early days of cooking, I always miscalculated the amount to use. Two cups is too much once it expand. A half a cup is more than enough to add to this soup.

Dried fungus is commonly used in soup with neutral flavor that adds texture with a chewy crunch. Do not overcook, it can get soggy.

How to Cook Chicken Asparagus Soup

This is a very easy soup to make.

(1) Boil bone-in chicken legs and thighs, giblets and chopped onions in 6 cups of water until tender. Chicken will cook first. Shred chicken and set aside. Continue cooking giblets until fork tender. Slice and take the meat from chicken neck and discard skin.

If you don’t like to add the giblets in your soup, it is optional but make sure to add it when boiling the chicken. It will add so much flavor to your soup.

You can continue boiling bones for a much tastier soup but optional.

Note: You can boil chicken and giblets in advance, cool and refrigerate. If chicken was boiled with skin, fat will harden on top of broth. Remove fat and discard skin. Don't add skin in soup.

Tip: Strain broth if you like for clear soup.

(3) Use 1 can cut spears asparagus. Reserve liquid. If using fresh asparagus for garnish, cut to about 2 to 3 inches long.

(4) Cut Napa cabbage, separate the stalk or stem from leaves.

(6) Remove bones from chicken broth. Add asparagus liquid and fish sauce in broth, bring to a boil then reduce heat to simmer. Add chicken and diced carrots. Simmer for 2 minutes. Add Napa stalk or stem, simmer for a minute then add dried fungus, Napa leaves, asparagus tips and season with salt and pepper.

Note: Another way to do it, you can boil chicken and giblets in advance using only half of onion. Cool, refrigerate and skim harden fat on top of broth. In another pot, saute remaining onion until soft. Stir-in shredded chicken, giblets and diced carrots. Cook for 2 minutes. Then add vegetables. This is how I show it in my video.

(7) Add one egg, stirring slowly to break the egg. Turn off heat. Serve while hot and vegetables are crisp.

This soup is much tastier a day old. 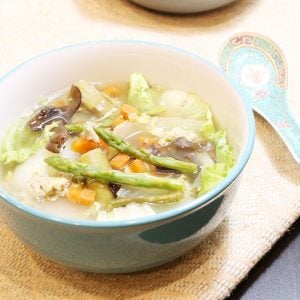