If you are looking for a sublime lobster bisque recipe that is easy, similar to restaurant-style or even better, try this recipe.

This decadent Lobster Bisque soup is great to serve on special occasions like Valentines Day, Mother’s Day, Father’s Day or anytime you have a craving. Making it at home can save you money plus you get more lobster meat for your money.

Father’s Day is around the corner, surprise your dad or your hubby with this delicious easy lobster bisque.

What is a bisque

Bisque is a smooth, rich, seasoned French creamy soup made from the broth of shelled crustaceans like lobster, shrimp, langoustine, crayfish or crab. Not all bisque contain seafood instead it is made with pureed aromatics and vegetables.

In the early days, it was tedious and time consuming to make an authentic French bisque.

The crustaceans and it’s shells are sauteed with aromatics and white wine, then pureed, strained and added back to the pot along with the broth and simmered. Shells were ground into paste, rice is cook and pureed and added to thicken the soup.

No doubt, it is packed with goodness but not all of us have that time.

My lobster bisque recipe is easier and very tasty as well. Although the process is slightly different from the authentic French bisque, you won’t be disappointed. It is delicious with less work.

Tips to make this bisque soup

(1) Lobster tail or whole lobster can be use. Thaw it overnight in the fridge or on the day you are cooking. Place it in a zip lock bag and submerge in tap water for 30 minutes or so until it is thaw.

Fresh whole lobster can be used as well but you have to kill it with a knife which is not my thing or submerge the whole lobster in boiling water, head first.

(2) You can use lobster of any size. Depending on your budget, you can serve it with as much lobster meat.

The best time to get them is a week before special occasions like Valentine’s Day. They go on sale and dirt cheap. You can freeze it until you are ready to make it.

(3) Before making the lobster broth, cut the shell with a kitchen shear to have easy access to the lobster meat even though it is hot. You can easily pry open the shell with 2 forks then cut and remove the meat instead of waiting for it to cool down. You can add the shells back in the pot with the broth and continue cooking to extract more flavor.

The flavor of the soup is mostly coming from the shells of the lobster than the meat.

Note: You can make the lobster broth in advance and refrigerate until you are ready to make the soup.

(4) If you don’t have enough broth, I like to use Bar Harbor’s clam juice instead of vegetable or chicken broth.

(5) Don’t overcook the lobster. Remove it from the shell, cut into chunks and set aside in the fridge. It will be added in the final stage.

Note: Instead of cutting the meat, you can add the whole lobster tail for a more impressive presentation, again this will depend on your budget.

(6) Saute carrots, onion, garlic, celery and herbs in Dutch oven or any pot. These aromatics impart deep flavors into the soup.

This process is similar to a mirepoix as base to my Seafood Gumbo with Lobster, Crab and Shrimp.

Instead of adding ground lobster shells and pureed rice to thicken the soup, I make a roux with butter, bacon oil and flour until golden (not dark) and heavy cream added at the final stage of cooking.

(7) Don’t skip the thyme, tarragon and bay leaves as they add so much flavor. I use fresh tarragon and thyme. You can substitute the fresh thyme and tarragon with ½ teaspoon dried thyme and ¼ teaspoon tarragon.

Note: Dried herbs are more potent than fresh ones.

(8) It is easier to use an immersion blender than a regular blender since I am not adding the lobster shells in the sauteed ingredients. I can puree the mixture in the pot while simmering.

Also, I don’t have to strain the the broth since no shells were added. Honestly, I don’t see a difference if I add the shells with the aromatics.

Simmering the shells on it’s own was less work, no straining and all the goodness flavors from the aromatics sauce stayed in the pot.

I definitely have to strain the sauce if I sauteed the shells too, plus some of the sauce will stick on the shells.

Even if I try to extract all the liquid, some will stay in the shell. All those delicious flavors will go to waste since I have no more use for the shells.

Been there done that!

So, I prefer to make my broth or stock separately.

If you don’t have an immersion blender, most high powered blender can blend hot soup but do it in batches. Steam can build up in the jar creating pressure and blow the lid off. So be careful.

Note: I suggest to fill the blender ½ full with the center piece removed from the lid so steam can escape. Place the lid and blend on low.

If you are not sure if your blender can handle hot soup, I strongly suggest to let it cool down before putting in the blender.

Note: Another option is to quickly saute the lobster meat in melted butter with a pinch of garlic powder before adding to the soup. I sometimes do, but in this case I did not. The broth is already rich in flavor and sauteeing the meat in butter doesn’t do much for me.

(10) On the final stage of cooking, heavy cream is added stirring constantly until well blended. This lobster bisque soup is creamy but not too thick. If you like it thicker, you can add more heavy cream.

Note: If you have seafood shells (not cook yet) to discard, think twice. You can save those shells in a zip lock bag for future use or make the stock and freeze it.

(2) Crab – Any variety of crab can be use to make bisque. The whole crab except for the lungs (feathery gills inside the crab) is use to make the broth or stock.

Some people are not aware that crab butter (the yellow stuff in the crab cover) is a delicacy in other countries. They refer to it as “poop” especially here in the US. I’m sure they have eaten it before without knowing since these are usually added to make seafood soup and sauce.

(3) Crayfish or crawfish – are freshwater crustaceans that resembles small lobsters. I usually find them at Asian stores.

Unlike lobster, you can only eat a small portion of the tail. All other parts can be added to make the broth.

(4) Langoustine –  I was surprise to find shelled langoustine sold at some Costco stores. In this case, you can use other seafood stock. I like to use Bar Harbor clam juice or use the head and shells of shrimp or crab to make the stock.

I’ve had langoustine bisque in Iceland and it was delicious. They are known for their langoustine dishes.

How long to store leftover bisque and warming instructions

I doubt you’ll have any leftover but if you do, place it in a sealed container and refrigerate up to 2 days and warm in the microwave or in a medium-low heat on the stove.

If it is too thick, add a little bit of clam juice or vegetable or chicken broth and heat it on the stove. Make sure to stir it.

Can I freeze bisque soup

Yes you can, but texture will not be the same as freshly made when reheated. The cream will separate from the soup and it will not be as smooth and creamy. Make sure to use a hand whisk to blend it while heating on the stove.

Store in the freezer in an air tight container up to 2 weeks. Thaw in the fridge before reheating. 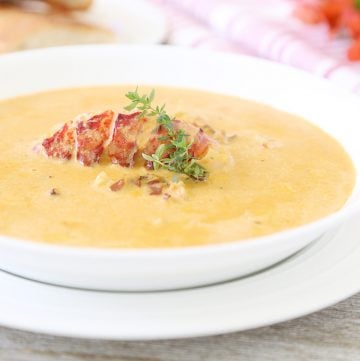