Vietnamese Beef Pho is Today’s Delight. It is easy to make BUT definitely not quick but close to an authentic beef pho. Don’t be deterred by the long detailed instruction. This homemade Vietnamese Beef Pho will not disappoint. I suggest that you watch the video and you’ll see how easy-peasy this pho recipe is. 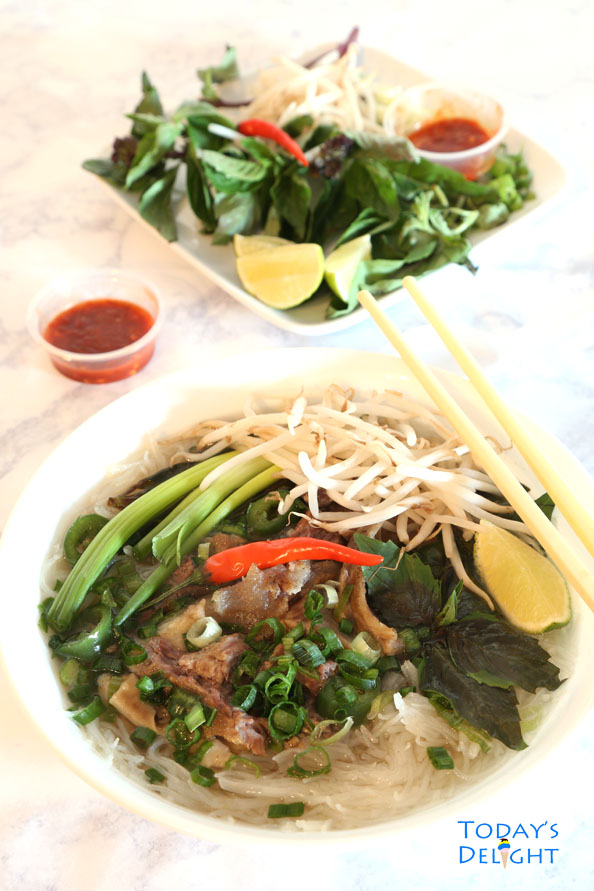 Vietnamese Beef Pho is a traditional savory Vietnamese soup simmered for hours, flavored with aromatic spices and consisting of rice noodles, beef and a side serving of basil leaves, bean sprouts, jalapeno, chili and lime wedge. Chicken can also be used. If you want some added kick to your soup, add sriracha sauce. The secret to a tasty pho is the broth and the balance of spices. When serving this soup, it best when it is really hot.

Years ago when I started working, I was introduced to Vietnamese cuisine by a fellow Filipina who was a co-worker and married to a Vietnamese. We took lunch together and shared food. For some reason, I never cared for the Vietnamese food she brought to work. She knew I did not like it.To me eating mint leaves was an acquired taste. I felt like I was eating toothpaste. Because of that, I totally block out Vietnamese food without trying other stuff. That was a big mistake.

Now that I am older, it seems like everything I did not like growing up are now my favorite. Until one day on a very cold day, I went out with a bunch of people and ended up in a Pho restaurant. The restaurant was packed and almost everyone was having pho. To my surprise, it was really good and very tasty. It was a good call to have pho that day.

It was the start of my exploration of Vietnamese food. Vietnamese Beef Pho became one of my go to food after a long day at work. It was also good to have when I have a cold.

It is unfortunate I lost touch with my Filipino co-worker since she was really pleasant to be around with. She’ll be amazed how much I love Vietnamese food now.

When I like something, I need to know how to make it. I’m sure it’s not hard since we Filipinos love to make soup from scratch using different spices. I started researching cookbooks and the internet. 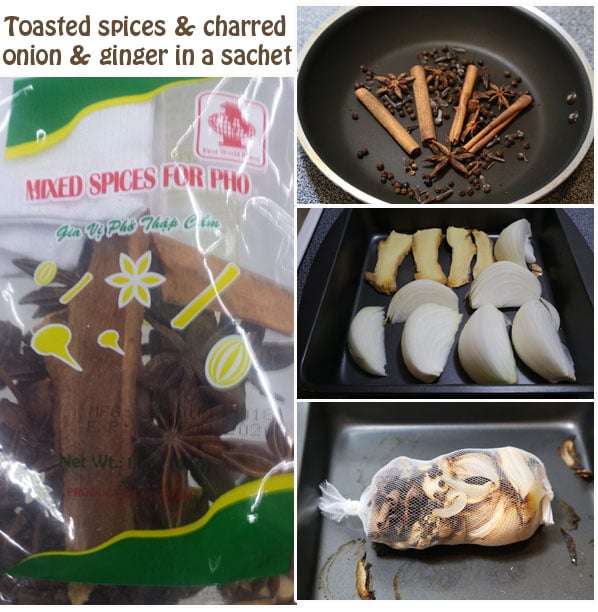 How to Make Pho Broth?

Again, Vietnamese Beef Pho is easy to make but not quick. After making Pho many times, I finally know how to do it similar to what I order. I have figured out what bones to use for delicious broth and the ratio of spices.

One time, I was buying makeup and end up talking to the sales lady who is Vietnamese. She mentioned she has Filipino friends and love our food. I asked her if she cooks Pho and she does. I told her I do too but I don’t simmer the bones for 8 hours or overnight only depending on the bones I am using. She doesn’t but her mom does. We both agreed that unless we are cooking for a lot of people then we might simmer it that long.

So anyway, when making pho broth you can use tendons, knuckle and leg bones. I try to find bones with cartilage and connective tissues attached. Honestly, I like these parts better than the meat which I learned to eat from my dad. Some Asian stores might sell the bones without the cartilage but I would ask the butcher if they can sell me bones with cartilage. It doesn’t cost much. Also, when making broth I like adding beef shank for a tastier and flavorful soup especially if not simmering for a long time.

Note: If you use more bones with marrow you will end up with an oily broth. So I tend to use more knuckles. Also follow the other suggestions below.

How Long Do I Simmer the Bones for Pho?

It depends on what I have in the pot. If using just plain bones without cartilage and beef shank maybe about 3 to 4 hours in low heat. But with cartilage, connective tissues and tendons I simmer it much longer until soft and tender. I like the cartilage to have a crunch when I bite into it. 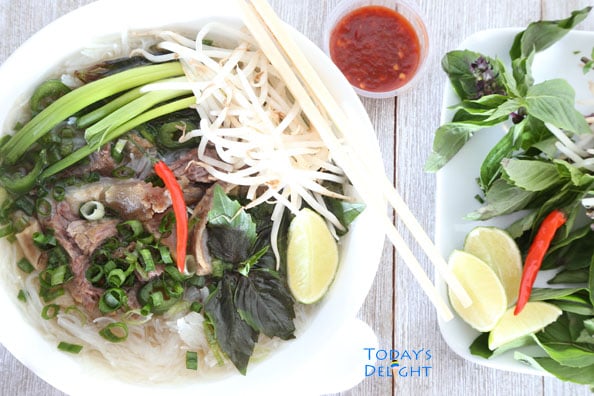 How to Get a Clear Pho Broth?

For a clear broth, after a few minutes of boiling the bones, scums or impurities will float on top. Once you see these impurities let it boil for another 3 to 5 minutes. Turn off the heat and take your pot and transfer the bones using a tong to a colander.

Wash all the bones and meat. Dump the broth and rinse the pot to clean the impurities around it. Now put all mixture back in the pot and fill the pot with water about ¾ full. Don’t worry you are not losing any of the flavors.

Bring it to a boil. As soon as it boils reduce heat and simmer for hours until cartilage and tendons are tender. If you are adding other meat like beef shank or brisket check after 45 minutes. If tender, remove and set aside.

When done, let it cool completely. Remove all the cartilage and tendons from the bones using a  knife and set aside. Also, if you love bone marrow you can use a knife to remove it inside the bones. When I was younger I love this but now I discard it.

Put the bones back in the pot. Place the pot with broth in the fridge for half a day or best yet overnight. The excess fat will harden and form on top and the broth underneath might have a gelatin like texture. Skim the top to remove the fat. It is white, thick and greasy.

When ready to assemble your pho soup, bring it to a boil and reduce heat to medium-low. Add the sachet of spices with the broiled onion and ginger. Simmer for about 45 minutes to an hour. 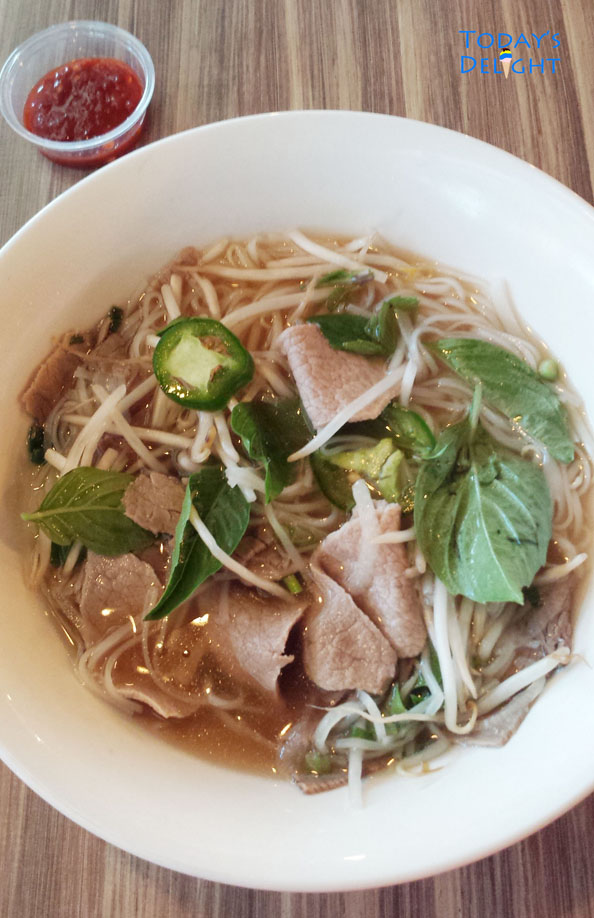 How do I assemble this Vietnamese Beef Pho?

First cook the rice noodles by dipping it in boiling water. Drain in a colander and set aside.

Wash all the vegetables you are using as garnish or toppings such as Thai basil, bean sprouts, jalapeno, white onion, garlic onion and Thai chili peppers. You are not limited to these vegetables. Garnish it with what you like.

Prepare the cartilage and tendons. Slice the meat. Also, you may add thinly slice of raw meat like tri-tip, sirloin steak, eye of round or flank steak. Whatever meat you are using, it best to freeze it first until it is hard but still soft to slice. Slice the meat against the grain. In this recipe, I use rib eye steak. Do this when ready to serve or after slicing put it in the fridge while preparing the other ingredients.

In a big bowl, add the rice noodle, meat and white onion. Serve all the vegetables on the side. This soup is best when hot. Enjoy!

Note: You can buy the spices separately or if you go to an Asian store they might have a kit of mixed spices for pho which also include a sachet. 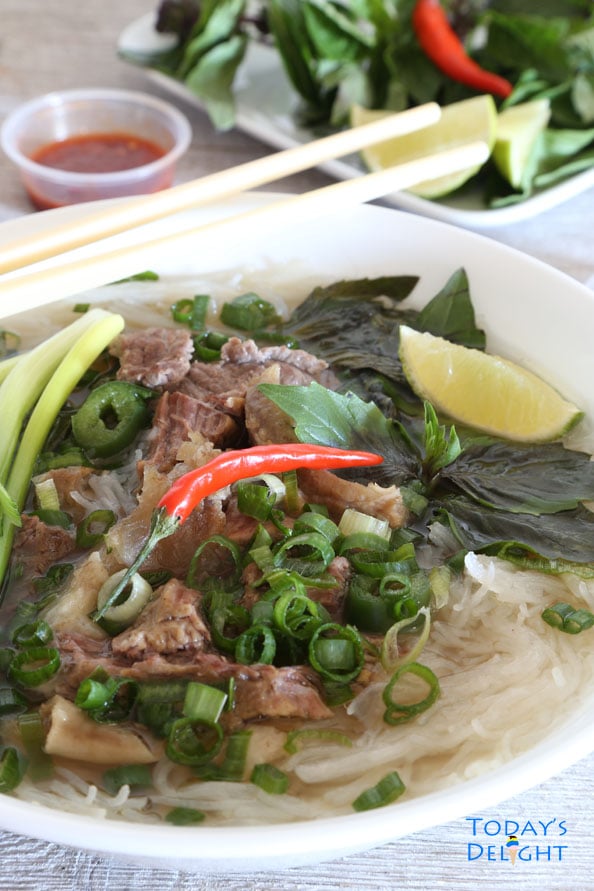