Bulalo recipe is a popular Filipino soup made from beef shank and bone marrow. One of the easiest and tastiest Filipino soup.

Batangas is a province in the Philippines known for its Bulalo.

Be prepared to eat so much rice when having Bulalo drizzled with fish sauce.

It is a scrumptious soup with corn, potato and vegetables. Even though I load up on veggies, I still eat so much rice with it.

When we were young, my mom always prepared this soup and boy those bone marrow were so delicious.

Now that we are older, we try to limit  our consumption of bone marrow.

When making Bulalo, it takes a while for the meat to tenderize. So start early if planning to have it for lunch.

For a clear soup, remove the scum or impurities once it boils. Then lower the heat to medium – low and simmer for hours or until meat is tender.

When making bulalo, I like it when the meat is falling off the bone. So YUMMY!

Last year, we were in the Philippines and it was sweltering heat and we were having Bulalo. Filipinos love having this soup even though it is hot outside.

How to Cook Bulalo Recipe video 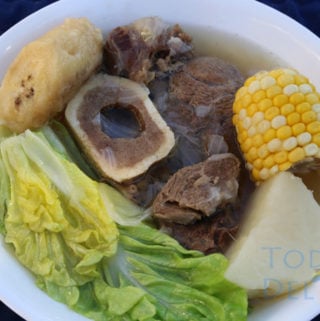