Try this Apricot Glazed Carve Ham with Rosemary and Brown Sugar for this holiday season!

If you like the sweet flavor of fruit, apricot combined with rosemary and brown sugar makes a really good ham glaze.

Give ham a different twist this feasting season or try my other decadent ham recipe. Try this delicious Pineapple Brown Sugar Glaze or this popular succulent Honey Baked Ham.

Thanksgiving is upon us and before we know it, it’s Christmas. Don’t you feel overwhelmed during the holiday season?

Most people are working before the holiday and it doesn’t get much easier than serving a fully cooked carve ham or a spiral ham that is reasonably priced.

It can eliminate spending long hours in the kitchen and the only thing to prepare is a homemade sweetened glaze which is better than store bought.

If ham came with it's own glaze, you can use that or add some ingredients to improve its flavor.

If you have a small household of 4 or 5 and spending Thanksgiving with only your family, a carve ham is best to serve.

Otherwise, if you prefer a fattier ham get a spiral ham.

A carve ham does not have as much fat compared to a spiral ham, overcooking can lead to a dry and tough ham that everyone will hate.

I am hoping you know your oven’s power. Ham is succulent, if moist and tender.

Consider making this Apricot Glazed Carve Ham with Rosemary and Brown Sugar this Thanksgiving. You never know, you might like it and serve it again on Christmas that family and friends can enjoy.

This summer I grew a few herbs and rosemary is one. This is the first time ever that I never killed an herb. Every time I buy rosemary or basil, it will thrive indoors for about 6 weeks, looking so frail and die.

This summer I experimented having them in big pots and some planted in the ground in shaded area. I am so happy, they have survived our harsh summer, still alive and healthy.

Next year, I am not putting them in pots since they grow better in the ground plus I don’t have to worry about manually watering 2x a day.

I have a vegetable garden that is equipped with drift lines scheduled to water daily and 2x a day. This is so convenient especially if I am going on vacation. In fact, I need to transplant them in the ground before I go on vacation.

Our winter is mild compared to other parts of the country. This will be another experiment if they will survive our winter weather. Stay tuned, I’ll have a separate post for herbs I grew in my garden.

Anyway, you can use fresh or dry rosemary for this glaze recipe. Fresh rosemary is easy to find in your local grocer.

If using dry rosemary, you have to cook the glaze longer until rosemary soften and adds flavor.

I got this carved ham at Costco but Sams carry it as well. A carved ham is a boneless ham and each package randomly weighs between 3.5 to 4.5 pounds which serves 6 to 8 people.

It is easier to slice a boneless ham and great for a small household. It is fully cooked, all you need to do is warm it through in the oven.

Bake it approximately 10 minutes per pound or until internal temperature reaches 130 deg F. Remember, cooking time in oven varies, so yours might take less or longer to warm.

If you are serving 2 hams, would you like to try my Pineapple Brown Sugar Glaze which is also delicious.

Before baking, if carve ham is in the freezer, move it in the fridge to thaw overnight.

I got this carve ham at Costco and it is not sliced. A sharp knife with a long, thin blade is needed for carving. Before baking, slice ham but not all the way.

How to Apply the Homemade Apricot Glaze

If it is more convenient, you can make the glaze a day ahead. Also, if you like extra servings of glaze that you can serve with the ham, add ½ or double the glaze recipe.

Take a heavy duty foil big enough to cover ham. Place ham on foil, slowly pour and spread some glaze over the top of ham.

Using a spatula, separate the slices and pour glaze in between the slices. This way your ham is fully coated with sweetened glaze inside out.

Note: Save some glazing to be used towards the end of baking.

3 to 5 minutes before done baking, take out ham. Open foil and apply the remaining glaze on top. Continue baking for 3 to 5 minutes or broil for 1 to 2 minutes to caramelize the glaze.

Make sure to stay nearby and watch that glaze doesn’t burn.

Not sure what to do, watch my quick video.

How Long to Bake Carve Ham

Wrap ham in foil after glazing. This will keep ham moist and glaze not to burn. Follow the instruction on the packaging. Mine took about 11 – 12 minutes per pound to warm it through. Also, baking time will depend on your oven.

If you would rather use a slow cooker or Crockpot, glaze ham saving some for later use. Set slow cooker to low and cook between 2 to 4 hours and basting with glaze every hour and half.

It is best to use a thermometer to check if you have reached the internal temperature of 130 degrees F.

How Long to Keep Leftover Ham

You can keep leftover ham in a sealed container for about 3 to 4 days in the fridge. Vacuum seal ham if storing in the freezer for a month. 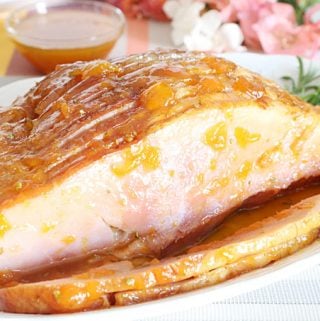