Are you one of those families who order Honey Baked Ham during the holidays! For many years we did until recently, I started making homemade honey baked ham copycat. Save your money and try this delicious baked ham recipe which is as good as what you buy at the store or even better for a lot less money.

This copycat honey baked ham is moist, juicy with crispy, charred edges and caramelized crunchy ham glaze. It is full of flavor and the aroma is so delightful.

This copycat ham recipe is easy, succulent and will save you a lot of money. Another plus, you can use the same glaze ingredients to make ham sauce. The one you buy from the store doesn’t come with sauce.

Ham is always a centerpiece for our holiday celebration surrounded by other delicious food. Lots of sweets that delight our palates.

There is so much food to go around and each family can even bring home leftovers.

In the Filipino culture, Christmas, New Year and Easter are our big holidays. I have lived in the US most my life and adapted Thanksgiving as one of our special holiday as well.

Once in a while, you’ll find turkey on our holiday spread but ham is always preferred.

Growing up in the Philippines, I was accustomed to Country Ham known as Hamon (Jamon) which we adapted from Spain.

Days leading to our celebration, my mom would have 2 packaged hams hanging in a corner of the kitchen.

I was young to know how my mom prepared it. Delicious but quite salty with an intense flavor and sliced thin. It is definitely an acquired taste. I usually ate it on it’s own like an appetizer.

Its been decades since I’ve had this type of ham. I don’t even know if it is still common in the Philippines.

I started making my own honey baked ham glazing just a few years ago. A former co-worker brought ham to work that was warming in a crock pot and it smelled so good.

I thought she bought it at the store. She made it using this copycat recipe. I told her my mom has a copy of the same recipe she got from the library some 20 years ago but I was working and didn’t have the desire to experiment. It was more convenient to buy.

When the store started serving ham sandwiches, I used to get it. I can literally make another sandwich because it had thick layers of ham and it was delicious. But over the years, it changed. I think they were using the upper slices which was dry and glaze was non-existent.

A couple of months ago, a new store opened in my area. Instead of ordering a sandwich, I ordered 1 pound ham (3 slices) for $15. Again, I was dissappointed, no glaze. I guess the glaze falls apart when ordering by the pound or ordering a sandwich.

This is the reason why I was anxious to learn how to make it. Now that I am not working, I have more time to experiment plus I can make it for less than $25. This is my 3rd time making it.

Anyway, it won’t be long and the holiday is upon us. If your family are ham lovers, try this copycat ham recipe.

What ham to get

In the US, it common to find savory smoked pre-cooked ham with or without a glaze packet.

Note: If it comes with a glaze packet, you will not use that. Save it and use it for something else.

We are so busy during the holidays and a pre-cut ham is the best ham in my opinion. I don’t have to worry about carving the ham.

A spiral cut ham is sliced evenly closed to the bone and if cooked properly is moist and tender.

Another advantage, the savory glaze can drip inside the slices and penetrate the meat.

I get the ham at Sams or Costco. City hams are the most prominent you can find at the stores especially leading to the holiday season.

When you buy ham, it is noted on the label if it is fully cooked, spiral cut, smoked ham with natural juices and the weight. Aside from this, it includes heating and glazing instructions.

So make sure to read the label.

Note: If the ham you get is partially cooked or a different weight, cooking time will be different than mine.

Note: You need an UNGLAZED HAM for this ham recipe.

How big of ham to get

If you spend the holidays with family and friends, a 9 pound ham is good enough to serve 10 - 12 people. Allow at least ½ pound per person.

For an intimate celebration of 2 - 4 people, there are unglazed pre-sliced smoked ham sold by the pound.

The recipe card below has a slider and you can adjust the servings thus adjusting the measurement of the glaze ingredients.

If you like some leftovers, consider getting a bigger ham.

How to cook a honey baked ham copycat

Note: THIS HAM IS NOT FROZEN. I have it in the fridge for 2 days. THIS IS A FULLY COOKED HAM SO DON'T OVERCOOK. I ALWAYS FOLLOW THE COOKING INSTRUCTIONS INCLUDED WITH HAM.

If you like, you can also brush honey inside the slices.

5. Cover the pan tightly with heavy duty foil to keep ham moist and juicy. The ham’s heating instruction states to warm ham at 325 degrees F for 10-12 minutes per pound and DO NOT OVERHEAT.

Tip: Instead of warming for 1 ½ hours, I took it out 10 minutes earlier. It was warming for 1 hour and 20 minutes. I factored in the broiling time of 4 to 5 minutes in the total cooking time. It keeps ham moist.

6. APPLY HAM GLAZE - Remove ham from oven and remove cover. Baste ham with juices and let it sit for a few minutes. Transfer ham in the foil cover and pour ham juice in a container.

Apply 1 cup sugar spice mixture evenly all over ham. It is easier to rub it with your hands except on the cut side.

You can apply sugar mixture in between slices but optional. I use a small strainer to spread it lightly. If you have some leftover, read my tips below.

7. BROIL - Pre-heat oven then turn to BROIL. Place ham in pan and broil at HIGH (500) between 2 to 5 minutes until glaze is bubbly, melted and caramelized to a golden bronze color. Keep an eye on the glaze, it can burn easily.

Tip: If you find specks of sugar in some areas that did not caramelized, use a spatula and press it quickly against the hot ham to melt.

Tip: Locate the ham bone on the cut side and you will notice one side has more meat. When you serve the ham, the side with less meat stays at the bottom.

Another tip: We like the fat charred on the side with more meat. After the 1st broil, wait a few minutes until you are able turn the ham on its side. This next step is optional.

Sprinkle leftover sugar mixture on top of ham and broil for another 2 to 3 minutes. Again, keep an eye on the ham and don’t ovecook the glaze to prevent it from burning.

8. Remove from oven and rest for 5 minutes. Transfer to platter.

When broiling in gas oven, the oven door should be close so smoke does not escape in your kitchen. It can maintain a constant temperature with oven door open or closed.

The oven door should be ajar (not fully open) when broiling in an electric oven. This will prevent overheating otherwise it will automatically shut off.

This is a fully cooked ham and edible as long as it is not frozen. If frozen, thaw for 2 days in the refrigerator.

If you like having ham cold but would like it with honey ham glaze, skip the warming process.

Baste the ham with honey and rub the sugar spice mixture and broil. It is much tastier if you serve it with ham sauce.

Tip: This is convenient for holiday giveaways.

You can serve ham as is or remove slices from the bone.

Use a sharp long knife and cut around the center bone to free as many slices as desired and transfer to a plate.

Another option, cut it on both sides and leave it attached to the bone.

How to reheat ham

Tip: I like my servings warm, fat rendered with charred edges. I use my toaster oven to reheat a few pieces. Take 3 big pieces and place ham on a foil in 1 layer. Set BAKE at 350 degrees F for 2 - 3 minutes then turn knob to BROIL for 1 - 2 minutes. Adjust the cooking time depending on ham thickness.

Sides to serve with ham 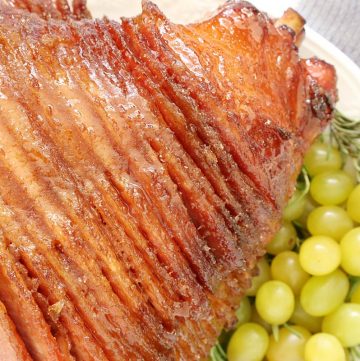 Other delicious recipes for the holidays

This amazing ham copycat recipe was adapted from Todd Wilbur.