Inihaw na Bangus is a popular way of cooking milkfish stuffed with onion, tomato, ginger, salt and pepper. When making this dish, there are many stuffing variations depending on the region.

Bangus or milkfish is the national fish of the Philippines. Because it is too bony, boneless bangus has become popular.

Grilling stuffed milkfish is so delicious with vinegar added to the stuffing.

My Mom, brother and myself prefer the belly of the fish. Growing up, my dad got stuck with the other parts of the fish especially the tail because it was too bony. My poor Dad!

Before grilling, clean the fish and prepare the stuffing.

Luckily, the Asian store where I get the fish will clean it upon request. They will remove the gills, gut and scale the fish.

The only unfortunate thing when they clean it, they end up scraping some parts of the fish belly which really annoys me.

Honestly, that is the only reason why I buy bangus (milkfish). I love the fish belly.

Well anyway, I am still happy that they do the dirty work and not me. Even though it is already clean, I still wash and clean the fish when I get home.

Once fish is clean, everything else is a breeze. Stuffing and grilling inihaw na bangus is very easy.

Note: When the store gut the fish, they open it from head down to the belly, stuffing goes in here.

In a bowl, mix all the ingredients and season with salt and pepper.

Season bangus with salt and pepper. Since I don’t put the fish directly on the grill, I also request that they scale the fish. This is optional.

Fish is wrapped in banana leaves and heavy duty foil. Follow the same procedure when baking and broiling in the oven. Using foil will catch the juice thus fish is infused with all the flavors.

Ten minutes before removing from grill, open foil so the skin of the fish becomes crispy and medium brown in color. Then flip to it’s other side.

To replicate this in the oven, after baking the fish, broil each side for about 5 minutes.

If you like it spicy, add some Thai Chili.  This savory dipping sauce goes very well with inihaw na bangus. It is very yummy!

How to Make Inihaw na Bangus

Watch my video “How to make inihaw na bangus” and make it this weekend. Magluto na tayo! 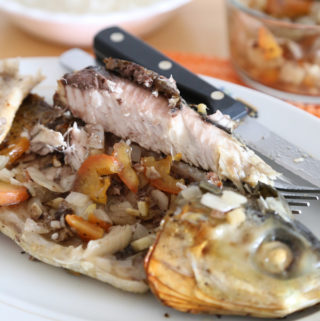