This plantain banana baklava was inspired by the Filipino turon that is made of plantain with pieces of jackfruit drizzled with sugar, enclosed in pastry wrapper and fried. Instead, I elevated it to a baklava turon style. 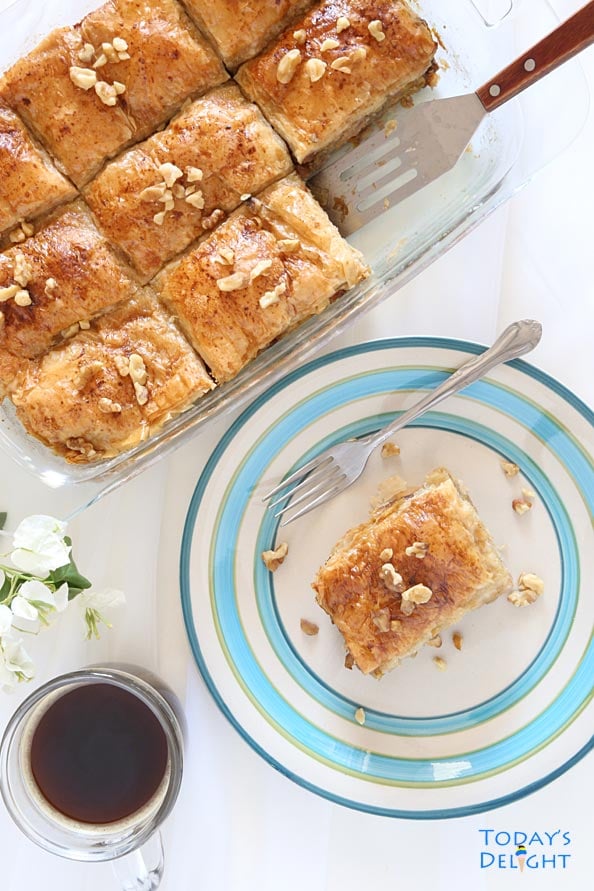 I like to indulge in desserts once in a while but an overly sweet dessert is not my choice. Whenever I make desserts it is not too sweet, it has a subtle sweetness instead.

I love pistachio baklava but I can only eat a bite or two, then I put it away for later. A small piece of baklava will take me 4 sitting to finish it. It is too sweet for my taste. This banana baklava has a subtle sweetness and not sticky. I use less brown sugar but more banana rum. Remember, a super ripe plantain banana is already sweet. Some people with sweet tooth might want to add more sugar to this recipe. Also, if you want this dessert to be swimming in rum syrup, add another half to the recipe.

You can use cinnamon, pumpkin spice or nutmeg whichever you prefer sprinkled on the banana layer.

Jackfruit is a tropical fruit and largest tree-borne fruit that originated in Southwest India. It also grows in Southeast Asia and in the Americas. It is a species of tree in the fig, mulberry, and breadfruit family and also known as jack tree. In the Philippines, it is called langka.

This is available in Asian stores, fresh or in can. If you are new to this fruit, I suggest you get the one in can.

To learn more about jackfruit and to see images, click the link What is Jackfruit?

Where to Buy Phyllo or Filo?

Phyllo or Filo is a very thin unleavened dough used in making pastries and it is available in your local grocer in the refrigerated section.

How to Cook Plantain Banana & Jackfruit

Note: If you decide to continue cooking the following day, place banana, jackfruit and syrup in fridge. Reheat syrup to melt solids that formed.

How to Make Plantain Banana Baklava with Jackfruit and Walnut

Note: There are 2 packages of phyllo sheets in a box. Each package has 5 sheets. Traditionally, when making baklava you brush each sheet with butter which is so tedious. If you decide to do it this way, use a spray. But it is much easier to lay phyllo by package.

Instead of making baklava, see how I serve my banana with syrup recipe. Click the link, Banana Plantain in Butter Rum Cinnamon Brown Sugar Syrup. 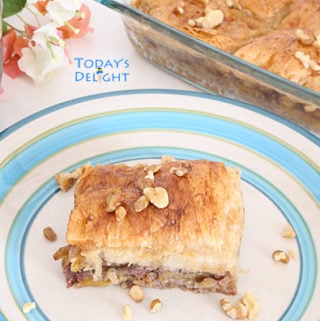 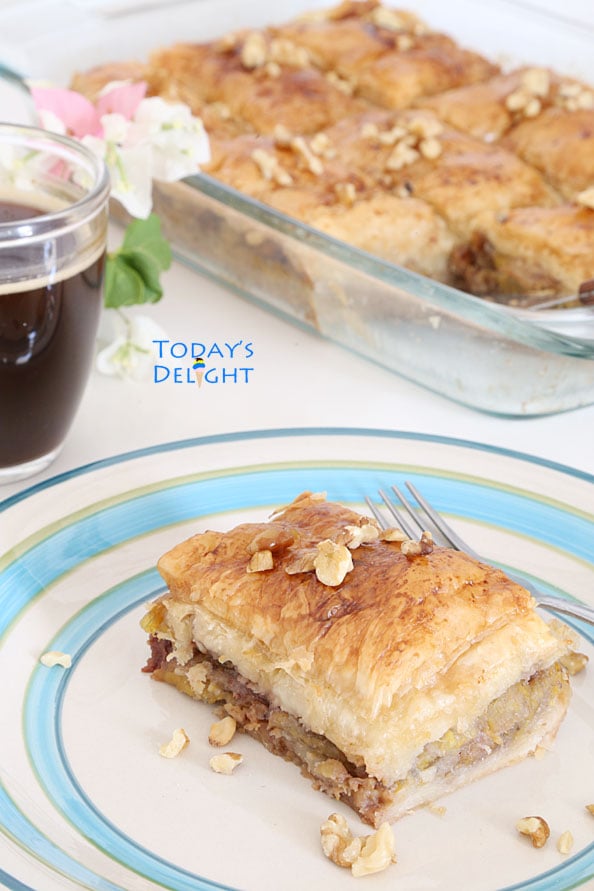