This Pineapple Honey Glazed Ham is simple with subtle sweetness of pineapple and a delectable crunchy brown sugar honey glaze served with sauce.

Pineapple juice pairs well with smoky ham and the pineapple's sweetness can help mask the salty flavor of ham.

This pineapple honey glaze is one of our favorite way of preparing ham and I’m sure it’ll be a hit at your holiday dinner as well.

It is easy to make and great to serve on Thanksgiving, Christmas or Easter gatherings.

In our household, when we get a craving on ordinary days, I get a smaller ham and make this Baked Ham with Pineapple and Brown Sugar or Apricot Glazed Ham. Both these ham recipe are simple and delicious.

This easy ham glaze recipe is versatile and can be substituted with other ingredients that yields a flavor close to the original ham recipe.

Spiral Cut Ham – any fully cooked ham will work but it makes it easier to serve a spiral ham during gatherings. You can go with smaller or larger ham, but of course you have to adjust the ingredient measurements and cooking time accordingly.

Note: The recipe card below has a slider to adjust servings.

Pineapple Juice – substitute with pureed pineapple chunks or tidbits with juice. I have not tried other fruit except for apricot which is delicious as well.

Brown Sugar – you can use granulated white sugar.

How much ham serving size per person

Allow ½ a pound of ham per person. Get a bigger ham, if you like leftovers.

How to cook a spiral ham with pineapple and honey

Thaw frozen ham in the refrigerator for 2 days. Remove ham from the fridge and its packaging. Reserve liquid from ham and place in roasting pan. Let it sit in room temperature for an hour.

Note: For food safety, I don’t recommend leaving ham in room temperature for over 2 hours.

Position the meatier portion side up on the pan while warming in the oven.

Note: I don’t place ham on a rack. I find ham tastier, as it picks up the pineapple flavor. Ham will not dry.

In the meantime, use a fork, knife or cake spatula and slightly (not fully) separate the ham slices. Pour pineapple juice in between slices. Keep basting ham with pineapple juice for the next hour.

Before putting in the oven, brush ham with ¼ cup honey.

Note: Bake ham based on the warming instructions on the packaging. The instruction on mine states “Warm ham at 325 degrees F for 10-12 minutes per pound. Do not overheat.”

Take the ham out 10 minutes earlier at 1 hour and 5 minutes.

Remove the foil. Be careful, it is hot. Baste ham one more time with pan juices. After a minute, transfer ham to the foil and place rack in the roasting pan. Then transfer ham with flat side on the rack.

Pre-heat oven, then BROIL ham at 500 degrees F (High) between 3 to 4 minutes or until brown sugar starts to bubble. Note: Stand next to the oven and watch your ham. It will burn easily at this point.

Gas oven – When broiling ham in gas oven, it can maintain constant temperature with oven lid open or closed. Close the oven lid so smoke does not escape in your kitchen.

Electric oven – I have an electric oven and l broil mine with the door ajar about 5 inches wide. Electric oven will shut off automatically when it overheats. Many people are not aware of this.

What ham to buy – bone-in or boneless?

Either/or will work and they are both delicious. If you buy ham that is NOT SLICED, I suggest you slice it evenly so you can pour pineapple juice in between slices. It can easily pick up the pineapple flavor and much tastier.

If you prefer not to slice, baste with pineapple juice every 5 to 10 minutes and make sure to make the sauce.

Can I marinate ham in pineapple overnight?

I DON’T recommend leaving ham in pineapple juice overnight. Basting ham with pineapple for an hour or so is good enough.

Pineapple flavors food and tenderize meat. Pineapple contains bromelain, an enzyme that breaks down the protein’s fiber and overtime can ruin your ham.

This is mostly true with fresh pineapple.

Can I cook ham in a crock pot or slow cooker?

Yes, you can. Make sure to buy ham that will fit your crock pot, otherwise you have to remove the slices from the bone and scatter it around.

A 7 to 9 pounds spiral cut ham will take between 3 to 4 ½ hours to warm on low or until it registers 140 degrees F on an instant meat thermometer.

Can I put a cold ham directly in the oven?

Yes, as long as it is NOT FROZEN. Thaw frozen ham in the refrigerator for 2 days. I don’t gurantee that it will be warm through right down the bone.

Note: I still recommend to leave ham in room temperature for an hour so it cooks evenly and moist. A cold ham will take longer to warm, drying out the ham.

Can I glaze a cold ham?

Some people like their ham cold. Most store-bought ham are already fully cooked and edible as long as it is not frozen. Place it in the refrigerator to thaw for 2 days. Ham is served hot or cold depending on your preference.

Yes, you can skip the warming process but you won’t have that pineapple flavor. I suggest you put 1 ½ cups of pineapple juice and a cup of ham liquid (if any in packaging) in the pan and place ham on top of rack. Apply the glaze and follow the broil instructions.

Sugar mixture will drip in the pan with pineapple juice while applying the glaze or when broiling. Use the pan juices and remaining honey to make the sauce.

How to reheat leftover ham?

You can fry ham, use the microwave or warm it in the oven. Set the oven at BAKE for 350 degrees F for 4 minutes then BROIL for 1 minute.

Store leftover ham in an airtight container up to 3 days in the refrigerator.

To freeze ham, store in an airtight container up to a month, if vacuum sealed up to 3 months. Thaw in the refrigerator before warming.

What side dishes to serve with ham? 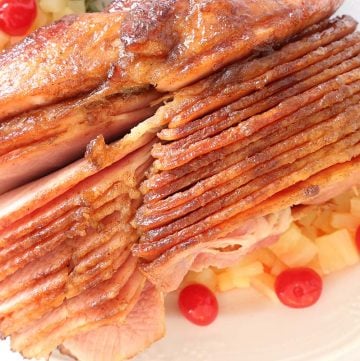 What to serve for holiday party