Frittata is an Italian open-faced (no crust) egg dish similar to a crustless quiche and easier to make than an omelette.

All these dishes are versatile, easy and quick to make with similar ingredients. I don’t see any difference between a frittata and a crustless quiche except for the ingredients you decide to use.

But there is definitely a difference between frittata and omelette. All the ingredients for Bacon Spinach Frittata are added and combined with egg mixture then cooked at low heat until it set.

While an omelette, the egg mixture is slightly fried before the cooked ingredients are added and placed in the center folding both sides of egg mixture to envelope the filling.

When I buy spinach for salad or soup at Costco or Sams, I usually have some leftover spinach. Sometimes I forget about it and it goes to waste.

Once I make the salad, I wash all the spinach so I don’t procrastinate what to do with the leftover. Bacon Spinach Frittata or an omelette are always my go-to for leftover spinach.

I cook the spinach with the onion and refrigerate. The following day, I prepare the other ingredients. This way, I am using it while it is fresh and not starting to wilt.

Honestly, it’s endless. I will name a few of my favorite stuff to add but you can always toss-in what you like. In fact, this is the best time to clean up your vegetable bin.

Egg white – yes, you can substitute whole egg with egg white. You will need more egg white though.

Spinach – I used fresh baby spinach. Regular or frozen will work as well. Wash regular spinach by submerging it in water a few times until it’s clean. Place in a colander to drain. If using frozen spinach, squeeze the water out.

Mushroom (any variety) – I definitely love adding mushroom, I just don’t have it.

Deli meat –  I used bacon and ham but it can be whatever you like – turkey, chicken etc.

Potato – should be diced into smaller pieces.

Broccolli and other vegetables – Cook vegetables before adding to egg mixture

Other cheeses – add your favorite cheese. Feta cheese is really good with frittata.

Milk – instead of heavy cream you can use regular milk, soy milk, almond milk, buttermilk etc.

Spices – I love adding smoked paprika and other spices like nutmeg.

Note: Just make sure you are not adding too much liquid to the mixture, it tends to be soggy.

Can I make it in advance

Yes, Bacon Spinach Frittata can be made in advance. Place in an airtight container and refrigerate up to 4 days. Heat in the microwave for 15 – 20 seconds or have it cold.

How to Make Bacon Spinach Frittata

(1) Cook frittata on stove top or in the oven. I am using both. Use a cast iron or safe proof non-stick skillet about 9 to 10 inches in diameter and 2 inches deep.

(2) In a large bowl, whisk the eggs, heavy cream, cheddar and mozzarella cheese, garlic powder, salt and pepper. If you are adding smoked paprika or other spices, this is the time to add it. Set it aside.

Note: I washed the baby spinach even  though it is pre-washed. It is a habit that I wash almost everything I use.

If you do, drain water. When cooked, discard released liquid.

(5) Transfer spinach on plate with bacon.

(6) Meanwhile, reduce heat to low then brush again the sides and bottom of cast iron with 1 tablespoon bacon grease.

Make sure ingredients are equally distributed using a spatula.

Note: If you like, you can reserve some tomatoes, bacon and ham for the top of frittata. These ingredients will be added once it has quite set already.

I didn’t. I just rearranged some of the tomatoes, spinach and onion on top.

(8) Cover cast iron with lid and cook frittata slow at low heat for 25-30 minutes. When sides are slightly brown and frittata has set, turn off heat. The center will be moist with some liquid but not runny.

(10) Use a knife or spatula to loosen the sides of frittata. Slice and serve.

This Bacon Spinach Frittata recipe is versatile, delicious, colorful and easy to make. Great to have for breakfast, brunch, lunch, dinner or any time of day.

Great for meal preps too! 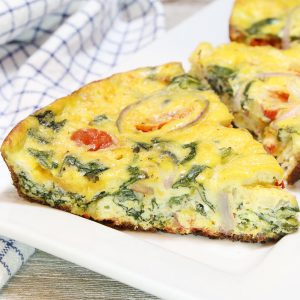